As there are so many researching the pizzagate issue we will not spend much time discussing it but rather, give you the info so you can see it for yourself and research further. The american government will not prosecute or look into things of this nature as they involve those in the government, media, holly wood, and much more. Since the people who get into these leadership positions are freemasons or jesuits and live by oath they will never betray each other. As we saw in the Hillary Clinton hearings and how FBI Comey covered for her-it was because he is a freemason and he is under her level. He has sworn to do whatever it takes to keep any of it gets out. Whether it has to do with him or any other freemason.

So. The pedo-ring that has been discovered through all of the recent email hacks is called pizzagate and with it, many practices and code words (pizza, cheese, ping pong, hot dogs…words that we use every day and will never raise suspicion hence CODE WORD) these people use daily and have used for years in our movies, songs and news, are now known for what they are. This is such a small glimpse into how the elite live but it is kept so secret from the masses it is difficult for people to understand. Many many satanic pedophile rings have been exposed, look into your area and see.  You must KNOW that THIS is what THEY do EVERY DAY. Being the elite and part of the club and initiations and all of that IS NO JOKE! It is not a small thing. That is what we mean when we say they live by OATH! Now. KNOW those who rule you for what they ALL are.

This is what happens to those who speak or find truths the elite keep hidden from the public: their real workings.

“What a coincidence! Breitbart’s coroner dead from arsenic poisoning?”

“Are Clinton Insiders Involved in Child Abduction? A Factual Analysis

Entire user database of the 1589 users active on Lolita City, an darknet trading site for pedos –Deleted
British conspiracy theorist who was found dead on a sofa in Poland was ‘investigating an alleged US Army pedophilia ring’ just before his death

“”Baba’s mountain,” likely referring back to the the pedophile Sai Baba. Baba’s mountain (i.e. pedophile’s mountain) is described as an event where youth are enticed to “come see for yourself.” It is accompanied by a photo showing minors gathered in the woods, with two adult figures standing over them dressed in ceremonial garb.”

“Posters over at 4Chan and Reddit have been conducting an extremely bizarre investigation following the John Podesta e-mail leak (Hillary Clinton’s campaign chairman) and the results are surreal: They’ve apparently uncovered an elite child trafficking network which celebrates its tendencies using code words and disturbing artworks.

“The Comet Ping Pong menu contains a logo that is strikingly similar to the ‘child lover’ logo used in these circles. Also, Play Eat Drink = PED.

The owner of Comet Ping Pongis James Alefantis who is, for some reason, ranked #49 in the top 50 ‘Most Powerful People in Washington’ of GQ magazine.” 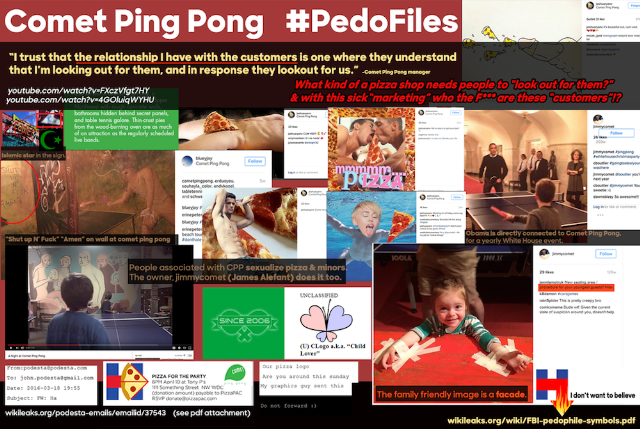 The “Suiciding” of Pedophile Investigators

“A chilling video with sexual torture, infants, pizza with a child’s head on top, that “Amanda Kleinman” (Comet Ping Pong) conveniently didn’t tell us about!!”

CPS petition DELETED, but had lots of interesting comments…

The De-Occulting of John Podesta

It involves institutionalized pedophilia, torture, and even cannibalism at the highest levels of U.S. government. Such practices have been known before in history – used to bribe and then blackmail those occupying high government positions, in order to control them. Now, it is being documented, that this has still been used in the present day.

These documentaries (and the information they contain) are at high risk of censorship, so it is recommended that they be downloaded and distributed via torrent, rather than just viewed.

The Smoking GunBreitbart tweeted in Feb 2011 that John Podesta was covering up pedophile rings. Dead a year later.. Also exposing possible connection of John and Tony Podesta in the kidnapping of Madeline McCann.

Published on Oct 17, 2016 The rabbit hole goes much deeper than most realize! Please spread this video far and wide. Cathy O’Brien’s is only one shocking testimony exposing the crimes of the corrupt leadership in the West.

Keep in mind, pedos are everywhere…this is nothing new. This is the elite’s agenda.

Destruction of the future: your children.